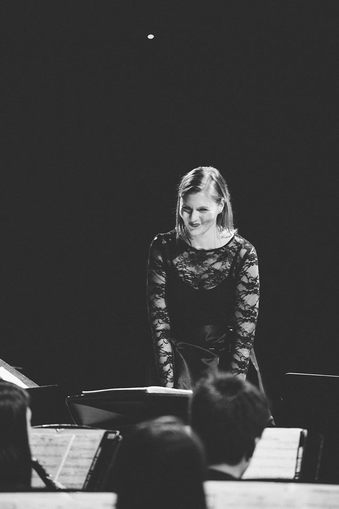 Some of Rebecca Watters' earliest memories are related to classical music.  From wearing out the "belly dancer 8-track" at Grandma's house (Sheherezade: Stokowsy & Royal Philharmonic, 1976) to listening intently for Margaret Hunt to announce the title of a captivating piece on the local public radio station and jotting it down in crayon (Vaughan Williams: Serenade to Music), Rebecca's ears have always been wide open and keenly focused on classical music.

​​Training in classical piano and Horn have given her invaluable experience in understanding the musician's perspective which drives her every experience on the podium. Rebecca earned a Bachelor's in Music from Murray State University in Kentucky, and a Master's in Education from George Mason University in Virginia. Her further studies have included conducting with Peter Stark in the UK, and Horn with Jamie Hersch in Singapore.

A native Tennesseean, Rebecca has taught music in overseas International Schools since 2001. Her career path has taken her across the US, and around the world, first as a classical music radio host in Kentucky and Maryland, then a pre-school and music teacher in Shanghai, and presently a music teacher and conductor at Singapore American School, the largest single-campus international school in the world.

Rebecca has adjudicated and coached for the IASAS Cultural Convention in Singapore in 2005, 2012 and 2019.  She has conducted at the Esplanade Concourse in Singapore with the ensemble now known as the Bishan North Horn Club, She became a composer in 2019.